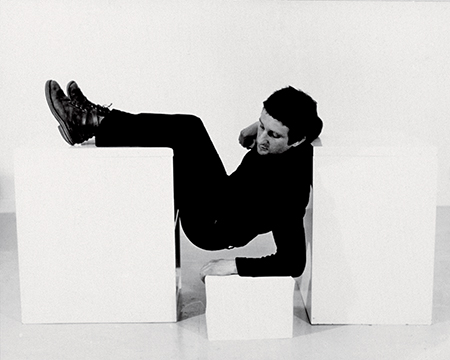 Bruce McLean is a Scottish sculptor, performance artist, filmmaker and painter. He studied at the Glasgow School of Art from 1961 to 1963, and from 1963 to 1966 at St. Martin’s School of Art, London, where he and others rebelled against what appeared to be the formalist academicism of his teachers, including Anthony Caro and Phillip King.

In 1965 he abandoned conventional studio production in favour of impermanent sculptures using materials such as water, along with performances of a generally satirical nature directed against the art world.

When in 1972 he was offered an exhibition at the Tate Gallery, he opted for a ‘retrospective’ he titled “King for a Day” which lasted only one day. From the mid 1970s, while continuing to mount occasional performances, McLean has turned increasingly to painting/sculpture and film work.

In 1985, McLean won the John Moores Painting Prize. Since retiring from his professorship of painting at the Slade School of Art, he has taken on a large studio in west London where he has been making increasingly large paintings and sculptural film works.