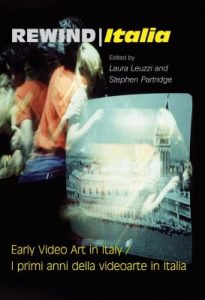 REWINDItalia (2011-2014) was an AHRC funded research project, based at DJCAD, University of Dundee. The research project aimed to retrace, reassess and bring under the spotlight the pioneering experimentation of video as an art practice developed in Italy from late 60s to the end of 80s.

A number of Italian artists were interviewed and feature in the database part of this website, along with associated materials and information on artworks.

REWINDItalia examined major historical and theoretical research questions, including: the cultural context that stimulated such fertile video experimentation; the progressive marginalisation of video art in the early 80s and subsequent oblivion for more than two decades; different approaches to the medium; the legacy of early Italian video art on contemporary practice; archives and preservation; early distribution systems; circulation of international and Italian theories and critical approaches within the country; contemporary exhibition and engagement practices.

Although REWINDItalia did not aim to migrate obsolete formats to digital, a few exceptions were made. For example, a group of seminal early video artworks by media art pioneer Luca Maria Patella was recovered. These videos, uncovered after more than 30 years of oblivion, show Patella’s original ‘intermedial’ and interdisciplinary approach to the medium.

REWINDItalia was presented at several conferences, exhibitions, screenings and events in the UK, Italy, Denmark, the Netherland, France, Switzerland, Poland and Denmark.

Many publications have been dedicated to the findings emerged in the project. These include articles appeared on the peer-reviewed journals N.paradoxa, Engramma, Arabeschi, the Journal of Italian Cinema and Media Studies, Media N, eWic (British Computer Society), Imago. Studi di cinema e media and Acoustic Space Journal.

The main output from the project is the dual language book: REWIND Early Video Art in Italy/I primi anni della videoarte in Italia (New Barnet: John Libbey Publishing, 2015), edited by L. Leuzzi and S. Partridge. This featured new chapters from various authors and also articles translated and made available for the first time in English.