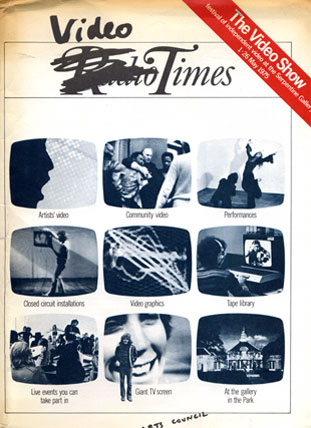 “In the summer of 1975 ‘The Video Show – first festival of independent video’, held at the Arts Council’s Serpentine Gallery in London, was the first substantial British survey of this still-new medium. Under a poster-headline proclaiming ‘Television has been attacking us all of our lives, now we can fight it back’ (the words of Korean/US video-pioneer Nam June-Paik), it, too, pursued an inclusive selection policy, bringing together tapes by many community and political groups, work by international artists such as Dan Graham, William Wegman and the Vasulkas, and installations and performances by rising British stars such as David Hall, Susan Hiller and Tamara Krikorian. The month-long programme included a repertory of tapes shown on monitors. Some American tapes came with the smart logo of the Castelli-Sonnabend Gallery, New York, on the front – introducing the novelty of a well-heeled commercial gallery with a substantial stake in moving-image media. Interest by British galleries had been limited;many British artists disaproved of limited-edition works in principle; certainly any hope that a market might develop in Britain proved premature. But the Serpentine show was widely reported in the art and even daily press.”

Arnolfini programme of up and coming events, including information on 'The Video Show', 3 - 7 June 1975

Minutes of the first meeting of the video show committee held at The Serpentine Gallery, 29 April 1974

Invitation to David Hall to join the steering committee for The Video Show, 1974

Letter to David Hall from the Serpentine Gallery, with details of meeting for Video Show, 1974

Exhibition card for The Video Show, 1975, detailing works on show by David Hall with a sketch of The Serpentine Gallery

Page in The Video Show's catalogue, 1975 - with information on David Hall's 'Progressive Recession

The Video Show, Serpentine Gallery, 1-26 May 1975, selected pages from the catalogue