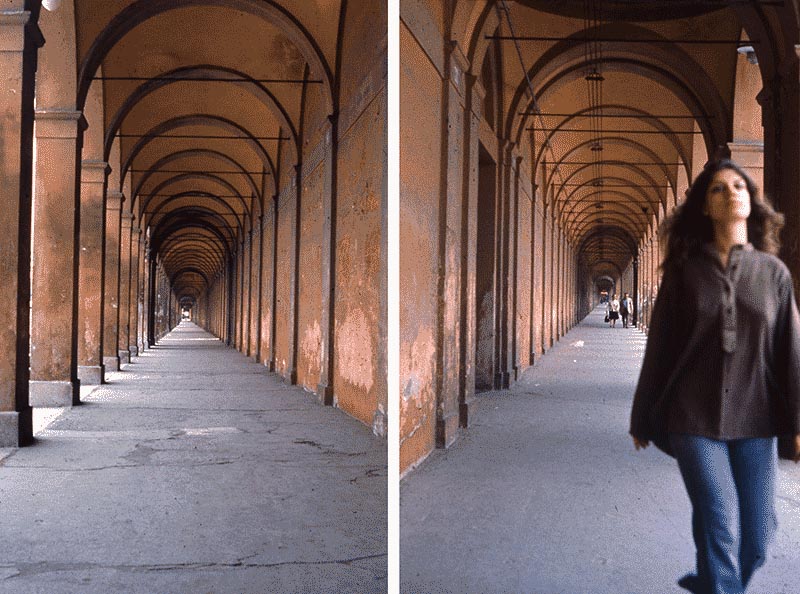 Il testimone (The Witness) 8mm film transferred to video, 1976-77, 3’33”. The artist walks down a portico and makes a point-of-view shot of what she sees: a seated man, initially at a distance, gradually gets closer. He has dark glasses, and for an instant the artist is reflected in their lenses as she shoots, asking him to bear witness to having seen her.

Autoritratto in una stanza (Self-Portrait in a Room) video, 1977, 10’03”. Courtesy of the artist and Archivio Galleria del Cavallino. The artist’s intention to make her self-portrait is denied during the making of the work itself: a study of her body, through pencil tracings left on the walls, is followed by the study of the room. From the view of earth left intact on the floor, the image shifts to the sparking of the water of the Grand Canal.

Attraversarsi (Crossing Oneself) Slideshow of photographs transferred to digital, 1977, 1’05”. The artist walks down a long portico, while at the two ends two photographers simultaneously make one photo every seven seconds. The editing of the two sequences underlines the central moment in which Anna Valeria Borsari, equidistant from the two vantage points, “crosses herself.”

Anna Valeria Borsari was born in Bazzano (Bologna) in 1943; she lives and works in Milan.