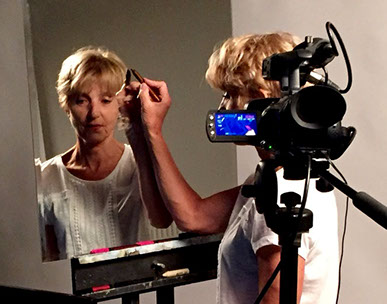 At the 2016 edition of ‘Visions in the Nunnery’ at Bow Arts (London), British video pioneer Elaine Shemilt re-enactacted live for the first time her seminal video performance Doppelgänger (1979-1981). Doppelgänger was recovered during the AHRC funded research project REWIND (DJCAD, University of Dundee), led by Prof Stephen Partridge, in 2012.

Doppelgänger is one of the only two surviving videos of Shemilt’s early experimentation with the medium. Shemilt employed video as a tool for introspection by manipulating her image, her face and her body. In Doppelgänger, Shemilt created a phantasmal double of herself exploring key feminist themes such as identity, sexuality, duality, women’s role in society and the status of professional women artists.

After three decades, Shemilt re-enacted, reactivated and reacted to the piece, sourcing from research materials from her own archive, and explored a new performative version of these key feminist issues.

More information about Visions in the Nunnery: http://bowarts.org/nunnery/visions-in-the-nunnery

Interview with Cinzia Cremona, curator of Visions in the Nunnery in Arshake: http://www.arshake.com/en/visions-2016-intervista-a-cinzia-cremona