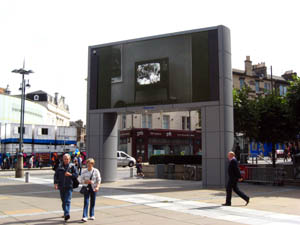 During the 1971 Edinburgh Festivals, David Hall broadcast his Television Interruptions on Scottish TV. Over several days, normal broadcast was randomly ‘interrupted’ by his unannounced and uncredited artworks, which remain among the earliest and most important in the history of video art. In celebration, these original works were again intermittently broadcast on the Big Screen Edinburgh. Also included is ‘Monitor’ by Stephen Partridge from 1975.