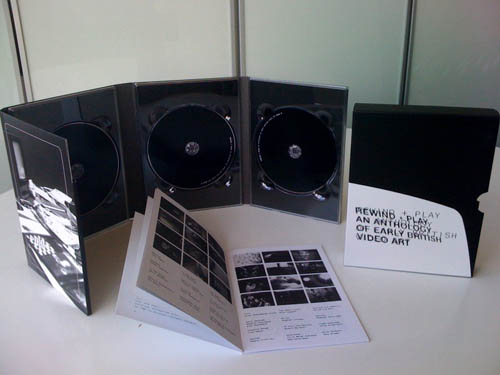 REWIND + PLAY presents a selection of key works from the first decade of artist’s video practice in the UK. From early conceptual experiments exploring the parameters of the medium to works dealing with media culture and television this collection explores the range and diversity of the first years of video as new media.

Published in collaboration with LUX.

Available from the LUX Shop

“…the excellent Rewind anthology: it’s a real treat, and would make teaching around this area so much richer.” – Ian Christie, Anniversary Professor of Film and Media History, Birkbeck University of London

“…the presentation is marvelous and should look good alongside the other boxed sets of The Wire, Skins, La Traviata and Alfred Hitchcock’s collected works! Don’t ever: STOP, STOP, STOP.” – Mike Leggett, Creativity & Cognition Studios (CCS), University of Technology Sydney