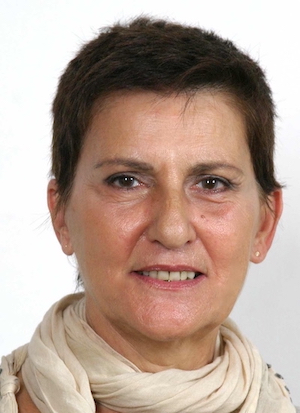 Painter, sculptress, video artist.
Born in Rome in the 1950s, she began her career in Basel with an evident interdisciplinary approach cultivated since the years of the “La Sapienza” University of Rome with masters such as Franco Ferrarotti.
In the 1980s she graduated from the Academy of Fine Arts in Rome by attending the Scenography course led by Toti Scialoja; began to deal with photography and graduated in theatrical costume at the Koefia Academy in Rome.
After the years of study she returned to Switzerland and in concert with her artistic research she was Assistant Set Designer and Costume Designer at the Municipal Theater of Friborg i.B. (D) and the Theater of the City of Basel (CH). She was selected by Pro Helvetia for the International Conference of Young Set Designers in Berlin (D)
In 1989 her work La traversata was awarded with a research grant at the “Kunstlestipendium” competition for artists of the Canton of Basel-City (CH)
In 1990, recommended by the critic Achille Bonito Oliva, she took part in the XXV Edition of the Internationale Malerwochen in der Steiermark at the Neue Galerie am Landesmuseum Joanneum in Graz (A)
She returned to Italy in 1994 and 1997, the Extension videosculpture wins the “Art in Rome 1997” Prize for contemporary art and is acquired in the permanent collection of the MACRO Museum of Modern and Contemporary Art in Rome (I)
In the 1990s she began exhibiting using and expanding heterogeneous languages, often mixing them together. Plastics, iron, color, electronic light give life to sculptures, artist videos, video installations and, later, digital images and interrelationships between color and numerical image, music and sound, poetic words, sculpture and digital forms in 3D.
This “interweaving of painting and sculpture, space and time, reality and virtuality, pushes the work towards the boundaries of telematics, removes physicality from the three-dimensional form and extends it into the television hypothesis” (Achille Bonito Oliva 1996)
The artist’s work is characterized by an intermediary attitude that has been defined since the nineties in particular in electronic moving images. Regardless of the medium and the techniques used, only apparently distant from each other, Adriana Amodei immediately focused on a research that aims to investigate introspective recesses beyond the pure evidence of the combination of elements; willing to share this process of knowledge through beauty as rigorous as it is admittedly non-rational along “a desire for an evident symbolic” (Marco Maria Gazzano 1996) and to make it a shared practice in the interpretation of the world.
A metaphorical invitation to travel that starts from itself and that welcomes the gaze and reflection of others as a predisposition. For this reason, the visual imagery that Adriana Amodei has and delivers to us has its roots in an original complexity: where it is easy to get lost in order to find yourself more aware.