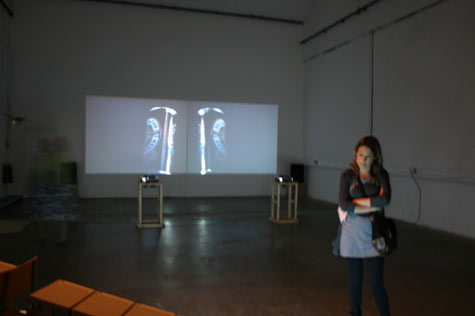 A look at the works which formed Picture This 2010 exhibition.

Picture This worked with Tony Sinden for several decades before his untimely death in the summer of 2009. The organisation commissioned a major site specific work which brought together technology and the mediaeval (Ancestral Voices (1993)) which was produced for the crypt of St Nicholas’ church in Bristol, and Dichotomy (2000) a major multi-screen installation which looked at ideas of the sublime and the changing meaning of landscape contemplated from multiple moments in time. The exhibition Tony Sinden: early works aims to trace the roots of a practice in order to view these and other later works with a richer understanding of their origins. Film historian A L Rees said of Tony Sinden, “Time-based thinking is at the heart of Tony Sinden’s art of installation and sculpture. …..he began as a film-maker. …..In his early “structural films” he questioned the logic of normal film space, repeating and reprinting the image or interrupting its onward flow.” (1) and it is precisely these early films that form the exhibition.

With its simple single screen format Size M (1970) is the exception that proves the rule. The simple physical presentation is densely filled with cultural references. Several viewings of the ten minute film are needed to even start to unpack it, and even then one leaves the work with lots of questions but intrigued. The cast contains monsters, figures, landscapes, interiors, pretty young things and sadomasochists combined with domestic objects and pop culture figures all manipulated through layered imagery and editorial juxtapositions. It is these technical tools used in Size M which predict Sinden’s focus on the structural element of film and video making in later works. Sinden’s practice never again uses this multitude of characters, but the silent, solitary figure (often the artist) reoccurs again and again. Size M can be seen as a work through which Sinden exorcised monsters such as narrative and interpersonal relationships, in able to move forward.

In Intermittent Intervals (1973) a fixed, locked-off camera films nothing more exciting than a suburban bay window. The visual framing recalls the three window panels of Fox Talbot’s first experiment in negative photography (2). Nothing happens inside the room apart from blinds being raised and lowered, and outside a car drifts past, or a passer by; the figure of a window cleaner (the artist) is masked by the roller blinds. It is neither the window nor the cleaner that is important here, instead it is the pushing pace of the edit, the pulse of the image between frames of black or white and the stop-start of the soundtrack that disorientates the viewer. Like Magritte’s famous statement Ceci n’est pas une pipe, in Intermittent Intervals Sinden is constantly reminding us that we are not looking at a view through a window, but we are looking at manipulated film of a window; at one point the whole image jumps upwards, cutting off the top half of the window, and the viewer is left looking at half of the room and blank film simultaneously.

Ababa and Functional Action – which were both produced in 1974 – reveal Sinden’s adoption of the purely structural. In these two films Sinden focuses on seemingly ordinary subject matter – a quarry floor and an English sea view, but that content is animated by the physicality of the camera’s relationship with the artist. The pace of Ababa is, in part, set by Sinden’s own physical pace as he runs across the quarry floor, each jerky camera movement is caused by Sinden’s movement and the image is literally what Sinden finds beneath his feet. This most basic of subjects is then treated to complicating manipulation through cutting and layering until an image that we are all familiar with – the ground beneath our feet – is barely recognisable. The ground is further un-stabilised by the vertical presentation of the image in front of the viewer rather than beneath us. Functional Action works in a similar way, the camera swings to and fro, but rather than travelling across the surface it is pinned down by the unseen figure of Sinden holding the camera, the motion comes from the turn of a head or the twist of a body. Functional Action disorientates the viewer through a lack of context, fast glimpses of a pier or seabird locate the subject when a horizon or peripheral vision are withheld.

Filmed on board a train between Brighton and London Can Can refers back to earlier classics from British photography and film – in this case the BBC’s 1953 point-of-view film from the London to Brighton train (3). This is moving image at its most reduced – a Newcastle Brown Ale can rocks and sways across the screen – we are literally watching an image of a thing moving. Sinden reveals his process by including shots out of the window and including the orange-tinted end of the 16mm film footage. Unlike the single screen works in Can Can Sinden’s experimentation is with manipulation of the presentation rather than the manipulation of the image. The image is presented twice, side by side, but the left hand screen is flipped, so we see the image mirrored. Presented on 16mm the two films gradually became out of sync with each other through the slippage and stretch of the film prints. While today this presentation is a familiar strategy of display, in 1975 this was a departure from the standard film presentation, as Sinden himself says “At the time I was interested in exploring the encounter of film: removing the projected film from the projection box and projecting it from the auditorium: extending a dialogue between the moving image, audience and surface of the screen. This period marked a transition in my film and video making: moving from cinema to the gallery, opening the door to installation: producing film-video concepts for a different audience and environment.” (4)

In the selection of early works which form this exhibition it is the work Behold, Vertical Devices which really demonstrates the trajectory of Sinden’s practice in the first half of the 1970s. In this work Sinden’s playful use of the moving image is present through the use of the monitor as a found object (along with the builder’s plank and the chair) and through the manipulation of the image. The seven monitors all play the same footage of a female figure running through a park. As with Functional Action the camera point is fixed, but it pivots to follow the jogger as she paces round and round. Sinden uses the horizontal ‘drift’ to make the image travel upwards, but the shift of the monitors 90 degrees onto their sides instead produces a forward movement. The static camera angle is transformed into a constant panning shot, keeping pace with the figure as she runs up the sloping plank, and with more than a nod to Muybridge. Behold, Vertical Devices has become Sinden’s seminal work, and it has become so through bringing together so many elements of early, youthful experimentation and articulating them so clearly. Referencing art history; continually seeking new modes of display and prioritizing the presentation over the filmic content, more than any of the other works it is here with Behold, Vertical Devices Rees’ definition of Sinden’s practice is demonstrated, his questioning of “the logic of normal film space, repeating and reprinting the image or interrupting its onward flow.”

These techniques and thought processes are used today by artists without a second thought, but here in it’s early stages it can be seen as stages of development towards not just Sinden’s later practice, but development towards the establishment of moving image as an expected feature in the gallery during 80s, and therefore towards the practice of most artists using the medium today.

(2) An image of a latticed window in Lacock Abbey in 1835 by Talbot is a print from the oldest photographic negative in existence.

Beth Alden is Programme Manager at Picture This and has worked on the organisation’s projects, commissions and exhibitions since 2005.